At the consultation, the doctor will examine you and select the best implant option
In terms of implantation is::

– direct (carried out simultaneously with the removal of a tooth in the alveolar well. Due to the incompatibility of the implant with the size of the hole, this implantation is effective with a two-step technique with preliminary root engraftment)
– delayed (carried out after complete reorganization of the bone in the area of the tooth extraction (on average after 6 – 9 months))

According to the method of conducting implantation could be:

– one-step method (non-separable implants are used, which are installed in the formed bone bed. The bone bed preparation is carried out using the bloodless method without suturing, or by cutting the mucous membrane and periosteum, which is made only along the crest of the alveolar process, then two mucoperiosteal flaps are peeled off, an implant is installed and sutures are applied. The prosthesis begins in the first days after the operation).

– two-step method (only the root part of the implant is placed in the bone bed and the mucous membrane is sutured over it. The prosthesis begins after the implant head is joined, on the lower jaw 2-3 months after the operation, and on the upper jaw 5-6 months later. At the beginning, the intraosseous element is installed, and after a certain period of time, the gingival former is installed on it, then the head (abutment) or another orthopedic component can be installed, depending on the implant structure. The two-step method is the most common procedure.). 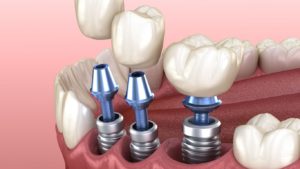 There is another common method of implantation – the installation of implants directly in the hole of the extracted teeth. For this procedure, a two-stage screw or cylindrical implants are usually used. Tooth extraction should be done without any damage to the edges of the hole. After the removal, partial preparation of the bone bed is performed to achieve congruence of the surface of the hole. After that the implant is installed, and finally the mucous membrane of the edges of the hole is mobilized and the wound is sutured. If after the implant is inserted, a gap is formed between it and the wall of the hole, then it must be filled with osteoconductive and / or osteoinductive material. If necessary, its isolation is ensured with a membrane and then the wound is sewed up.

This website uses cookies to improve your experience while you navigate through the website. Out of these cookies, the cookies that are categorized as necessary are stored on your browser as they are essential for the working of basic functionalities of the website. We also use third-party cookies that help us analyze and understand how you use this website. These cookies will be stored in your browser only with your consent. You also have the option to opt-out of these cookies. But opting out of some of these cookies may have an effect on your browsing experience.
Necessary Always Enabled
Necessary cookies are absolutely essential for the website to function properly. This category only includes cookies that ensures basic functionalities and security features of the website. These cookies do not store any personal information.
Non-necessary
Any cookies that may not be particularly necessary for the website to function and is used specifically to collect user personal data via analytics, ads, other embedded contents are termed as non-necessary cookies. It is mandatory to procure user consent prior to running these cookies on your website.
SAVE & ACCEPT